About Us Welcome to the Fitting-in

We can work with you to help you understand more about your organisation.Fitting-in has been working with the fire service since 2001.

I have a lifetime’s experience of working, researching, training, teaching and consultancy in and on the fire and rescue service. Since 1993 my 31 year’s operational experience as a fire figher and FBU representative has extended to the academic – researching all uniformed public services and teaching students on a public service course that I wrote and lead until 2010. I am now a Cambridge City Councillor and I continue to research and write on fire service culture.

For over thirty years I worked as an operational officer with the London Fire Brigade, serving for over 20 of them as a Station Officer at Tottenham and Edmonton fire stations. At a more strategic level I also spent much of my service as a Fire Brigades Union official serving as Area Secretary and then as London’s representative on the Officers National Committee.

On retirement (1993) I studied at Anglia Ruskin University, Cambridge to complete a BA (Hons) in Sociology and Politics and research for my Doctorate on masculinity, and fire service culture (Baigent, D. 2001)  This education provided me with the opportunity to change from – in my words, “a sexist, racist, homophobe to someone who now more fully understands the results and reasons of such difficult attitudes and their results for the individual and the service they work in.” 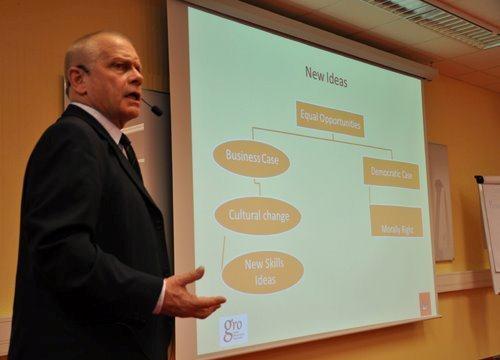 I am the founding director of Fitting-in, a teaching and training consultancy that basis all its work on research. Using my academic experience at Anglia Ruskin Cambridge and international expertise on fire service culture(s), the range of services offered includes:

Examples can be provided from our work in Sweden, Merseyside, South Yorkshire, Local Government Association, Northamptonshire and Cambridgeshire. I also work with other organisations but to date this work remains confidential.
Although our research is based on academic standards we do not live in an ivory tower and we are not ‘long on rhetoric and short on answers‘.

Between 2009 and 2014 Sarah and I have been deeply involved in a five year project in Sweden to support the employment of women firefighters. The MSB have said
Fitting-in with their unique insight into real world fire service culture and a firm theoretical base in academia provided the MSB (The Swedish Civil Contingencies Agency) with invaluable expert advice and assistance in developing a national action plan targeted at increasing equality and diversity in the Swedish fire service.”
In 2010 we completed a cultural audit of South Yorkshire Fire and Rescue Service Perceptions: what is believed to be true can become true in its consequencesOur 2010 cultural audit for South Yorkshire Fire and Rescue Service looked at how managers can improve relations with the workforce. This is what CFO Mark Smitherman had to say about our work. South Yorkshire Fire and Rescue was very pleased with the outcome of our involvement with Fitting-in; as it says on their tin, “managers in the emergency services are the experts – What fitting-in can do is help managers to use their expertise” and Dave and Sarah worked very well with us to challenge imbedded perceptions and cultural history within the service during a very intense period of change within South Yorkshire. The result is a far more rounded and pragmatic collective understanding of where we want to be as an organisation – a challenging process, but very worthwhile.”
We have an extensive portfolio with Merseyside Fire and Rescue, where we developed the Ethos project, which seeks to reconcile cultural difficulties in the fire service. The research has identified that it is possible to ameliorate the difficult cultural processes that turn new firefighters into people who resist change and modernisation.
This is what Merseyside Fire and Rescue Service had to say about the Ethos research, communications and training project:
“The Service are delighted with the research and reports produced by “Fitting-in. We believe that your original hypothesis and work undertaken in Merseyside has resulted in a ground breaking piece of work that can only serve to inform the wider fire and rescue communities.”
Fitting-in also hosts the very successful http://www.fitting-in.com website that freely publishes international research on the fire and rescue service.
I also offer assistance to a number of national and international students studying for a range of awards.AcademicUntil 2010 I was a principal lecturer at Anglia Ruskin University Cambridge where I wrote and taught on the UK’s first Public Service Degrees. The FdA and BA Honours in Public Service are designed to help potential new entrants and existing members of the emergency services with the critical skills necessary to run tomorrow’s uniformed services.The degree takes a critical view of all the emergency services.  In particular it focuses on understanding service and cultural reaction to modernisation, community participation, service delivery, leadership, change management, modernisation, trade union relations, politics equality and diversity.To support the Public Service Degree, I also established the UK’s first social science based fire service research unit at Anglia Ruskin University, Cambridge. This unit has been responsible for a number of research projects, including the influential Sunrise report on initial training. Additionally the unit submits reports to government committees on the fire service and is approved by the CAA for auditing airport fire services.My academic portfolio is based around my research based teaching. In the wider sense my academic specialities feature formal and informal work cultures, masculinity and gender construction. From a more focussed perspective I research and teach on the effects and influences of formal and informal work cultures, change management and leadership, the social construction of masculinity and gender, equality, and women’s experience in the fire and rescue service.

Baigent, D. (1996) Who Rings the Bell? A Gender Study Looking at the British Fire Service, its Firefighters and Equal Opportunities, Cambridge: available at www.fitting-in.com/diss.

Baigent, D. (2003a) ‘Memorandum by The Fire Service Research and Training Unit, Cambridge (FIR 12) to the
Select Committee on Office of the Deputy Prime Minister: Housing, Planning, Local Government and the Regions, available at http://www.publications.parliament.uk/pa/cm200203/cmselect/cmodpm/1168/1168we16.htm’.

International : 2012 and 2013
Sarah and I continue work done in 2009 to the current day on a considerable programme for change with the Swedish Fire Service . A central feature of this work was the idea of a fire station for all which Dave developed for Sweden and featured centrally in a Swedish Government Report and in their whole programme for the employment of women as firefighters.

Gender and Emergency Services Project 2010-2014 at Karlstad University
“En brandstation för all” 2012 (a fire station for all) at Räddningstjänsten Syd
Speaking with Firefighters, the MSB, SMO and academics – see press release for talk at Karlstad
See reference provided by

We have also presented to the LGA Equality Network on our analysis of how ‘Localism’ would influence the equality agenda. The presentation, including the feedback from the interactive session, are available on the LGA website. We are available to carry out similar work in your service.The Chair of the network Cllr Brenda Forster said:
“Fitting-in provided an excellent and informative presentation, with many attendees giving it very positive feedback. The information on fire service culture was very interesting and the interactive session provided some good insights for the attendees”
LGA Annual Conference 2010 – Fitting-in workshop on fire service culture.

• In October 2007 I was an invited speaker for three sessions at the Diversity in Emergency Services Conference in Melbourne. Australia – for details of my speeches go to

I took part in the delivery of two international conferences:
• At the Avon “Women as Leaders in the Fire and Rescue Service” I chaired a series of workshops on the subject of “Jobs for the boys” and reported back to the plenary.
• At the “Leading Improvement through Leadership” conference at the Fire Service College I sat on the round table debate on equality

During 2004 I was a research fellow working in Australia as a researcher/guest of the University of Western Australia and New South Wales Fire Brigades (Sydney). During this visit I presented a paper at the AFAC annual conference in Perth.

I continually assist international researchers with their work on the fire service.The assistance I have given students, researchers and employers in the UK, USA, Australia and Scandinavia indicates that the fire service may have a ‘universal’ informal culture: a culture that each generation of (masculine) firefighters keeps in trust for the next generation. Amongst the values this informal culture celebrates are some difficult areas around white working class masculinity and some ultra conservative attitudes about change. It is this difficult area of informal cultural values and the modernisation project that my work concentrates on.

Baigent, D. (2004a) ‘Fitting-in: the conflation of firefighting, male domination, and harassment’, in J. G. a. P. Morgan (ed) In the Company of Men: re-discovering the links between sexual harassment and male domination., Boston: North Eastern University Press.
Baigent, D. (2004b) ‘Firefighting men can do it can women do it too’ Australian Fire Authorities Annual Conference, Perth.
Baigent, D. (2004c) ‘The secret fire-fighter: revelations of inequality in the fire service,’ Local Government Association Annual Conference (Fire), Manchester, UK.

Baigent, D and O’Connor, S (2009) ReadRight: report of an Inspire Research Fellowship into improving access to education for non-traditional students

Educational Background – Present
PhD
Sarah has just completed her PhD on fire service managers and management at the Kent University.
Sarah completed a Foundation degree in Public Service in 2003 and became the highest scoring student on the BA (Hons) degree in Public Service when she graduated in 2004.
Since graduating Sarah has pursed her passion for teaching by attaining her Post Graduate Certificate in Education. Sarah has taught students at various levels until she left Anglia in 2010.


International
Sarah has researched and co-delivered a range of papers with Dave Baigent in relation to equal opportunities in the fire service
• Diversity in Organisations, Communities and Nations,’ Amsterdam.

Skills Audit
The BA (Hons) Degree provided Sarah with the skills to:

• explore ways of developing the change needed in line with government objectives in relation to the ‘re-invention’ of the fire service.

• to help re-build the framework of individual and watch identities.
Sarah applies her knowledge of sociological theory to ‘real events’ and her real skill may be demonstrated in the use of ‘abstract conceptualisation’.
Research experience has led Sarah to develop a wide understanding of the multi-faceted tensions in the developing fire and rescue service. Sarah’s real passion is in trying to create the space for individuals to develop and re-align a sense of self- identity within the complex cultural arrangements that exist, whilst not loosing sight that public service is under constant pressure from government to modernise.
Sarah works with Dr Baigent to promote a reconciliation of competing cultures within an environment of pressurised change.

Sarah is joint author of a series of Ethos Reports- the research based report that suggests new ways of answering the question that most Chief Fire Officers ask – “Why is it that the values and attitudes held by firefighters when they join the fire service, almost seem predisposed to change from the day they commence training?” Contact Dave Baigent about these exciting reports, which have been completed for the ******* Fire and Rescue Service and hopefully will be made public released soon

O’Connor, S. (2004) The Individual In The Fire Service: A study of the changing context of the white male heterosexual firefighter in the fire service, exploring gender, culture new forms of institutional control and effects on self-identity, Dissertation for BA Honours in Public Service Anglia Ruskin University, Cambridge.